Sha-sha!! I'm SuKanzoo! I started playing Pony Vs Pony back in about mid-late 2012 when my brother's been playing it for a bit. After I became a brony, I've been imaging a crossover story series between the MLP and PVP for years. It turned out... pretty messy. But that's because it should've either been a crossover or an autobiography, not both. Trying to mix all three things together was too much work and didn't need PVP on various aspects. Though I did have fun thinking about all that. There's even fanart from that show below, although the one with my MagiPony comforting Angel Bunny is non-canon. And yes, I did call my pony from Pony Vs Pony a MagiPony to identify those ponies, hence the name of my failed crossover, 'My Little MagiPony'. Was that a mouthful of "ponies"? Anyway, I can still recreate my series, but I'll either have to remove PVP entirely or until a late point in it. But the word "MagiPony" is still a fan term, so it's not used in this wiki. I needed to make this wiki since PVP's still been a huge sensation to me and that I can see a good opportunity if it was made into either an RPG or a fighting game. It's too bad the game made as is didn't catch on that well. I would've enjoyed adventure mode.

Right now, I've recently been into my new big thing, 'Chip and Potato', a pre-school show where a kindergarten pug, Chip, faces new challenges in her life with the help of her secret mouse friend, Potato. I even made a MagiPony based on that show's main character (see below). My other big things are 'Wow! Wow! Wubbzy!', and of course, 'My Little Pony'. 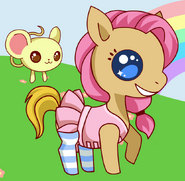 Chip and Potato in PVP form 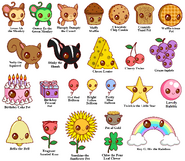 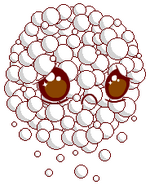 My sheet of MagiPet power ideas is PVP were an RPG or fighting game.

All of my MagiPet plushies! 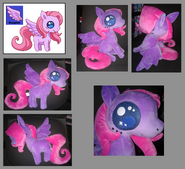 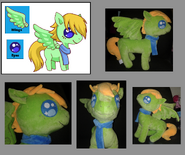